This Swedish guy "beer idiot", Morgan Källefjord is the owner of this brewery. He once started his career as a mechanic in Sweden, and went to Philippines for vacation. His vacation made him seattle down and he started a business, it was a floating bar in Sabang bech (outside Puerto Galero). Then it turned out to a bar and restaurant in Manila, and then one more in Tagaytay. The name of the bars is "G point Smörgåsbord & Bar". G Point is a slang for gimmick point, a place where ideas and joy will grow.

2011 he started to work on his new idea: "A real beer, that beer lovers would love to drink". He went to Europe and discovered micro breweries in many different countries and learned about the producing proccess.

He went to Sweden and started to investing for his own brewery and sent the equipment to the Philippines, and installed everything, see more from the construction under the "construction" tab.

During 2012 the two first ale beers where made and sold at G Point Smörgåsbord & Bar. In our news feed you can follow our development and our work. 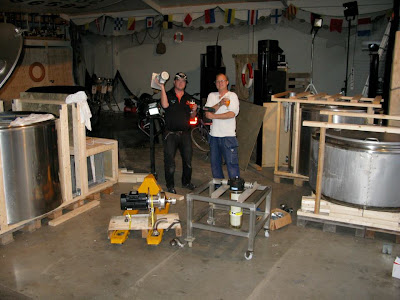